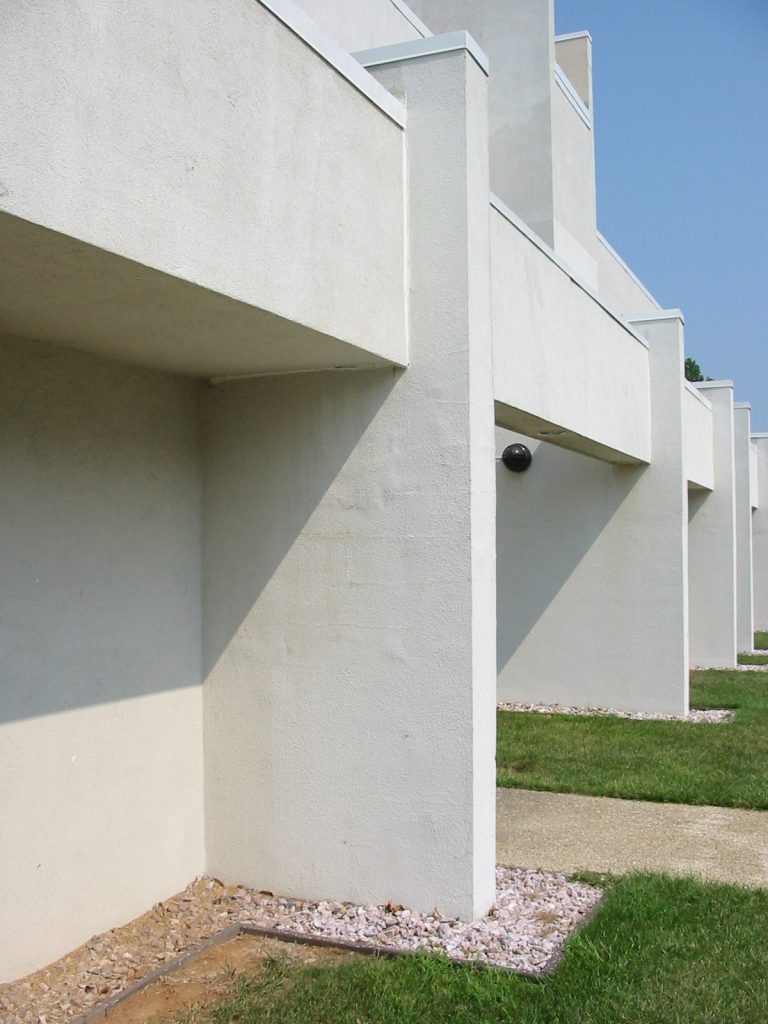 Exterior insulation and finish system (EIFS) is a non‑load‑bearing cladding system commonly used for insulating and weatherproofing building facades. EIFS utilizes a rigid board‑type insulation adhered or fastened to masonry or stud-framed walls. A hard, thin, mesh‑reinforced layer of cement or acrylic-based material (the base coat) is applied over the rigid insulation, followed by a textured finish (the finish coat). Together, the reinforced base and finish coats are referred to as “lamina.” Due to its stucco-like appearance, EIFS is sometimes called “synthetic stucco.” However, EIFS is quite different from traditional, portland cement plaster-based stucco. 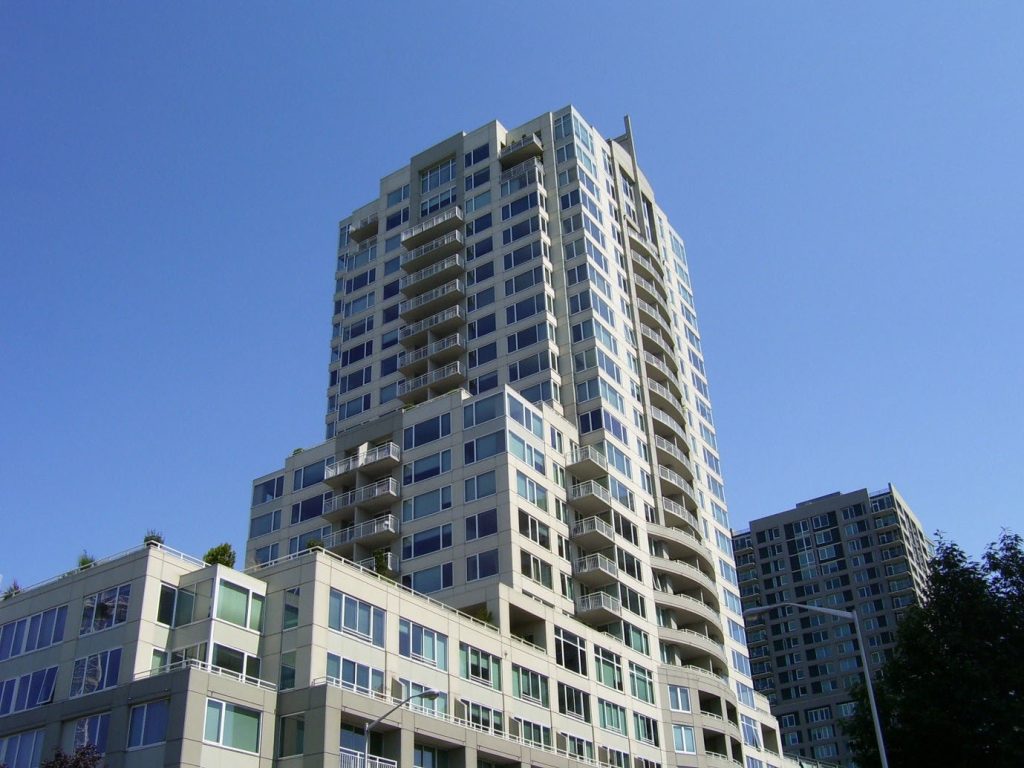 EIFS was developed in Europe following WWII, and applied to masonry walls of older buildings to restore appearance and improve thermal performance with its continuous insulation. The U.S. began using EIFS in the early 1970s and adapted it for wood-and steel-framed walls with wood or paper-faced gypsum sheathing. By the 1980s, EIFS used in this manner had become commonplace.

Earlier EIFS applied directly to wood, paper-faced gypsum, or masonry substrates are often referred to as barrier EIFS. Barrier EIFS has no water-resistive barrier or flashings behind the insulation layer. Instead, barrier EIFS relies on the lamina and sealant between the EIFS and other facade components (e.g., windows and doors) to stop water from penetrating the facade. In practice, achieving and maintaining a watertight EIFS and sealant barrier is difficult. Water penetrating cracked EIFS, sealant failures, or other leaky facade components can enter the wall system. Without a drained water barrier and flashings, this water becomes trapped, where it can cause structural damage and foster mold growth, particularly on substrates susceptible to moisture damage. 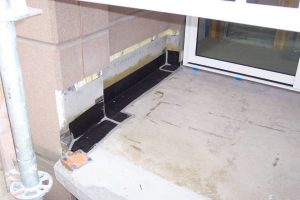 By the late 1980s and through the 1990s, building damage and deterioration wrought by barrier EIFS became the subject of numerous lawsuits and received much publicity. As a result, barrier EIFS is uncommon in today’s construction industry due to better understanding of its risks. Many jurisdictions prohibit barrier EIFS or require special inspection in accordance with the International Building Code (IBC). The IBC and International Residential Code (IRC) do not permit barrier EIFS applied to wood-framed walls.

Due to its stucco-like appearance, EIFS is sometimes called “synthetic stucco.” However, EIFS is quite different from traditional, portland cement plaster-based stucco. 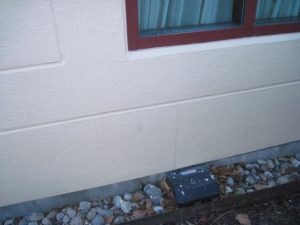 Barrier EIFS at wall base. 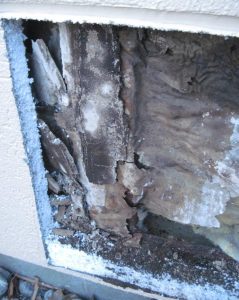 Despite its clean, recently painted appearance, sampling at this location reveals substantial water damage to the wall sheathing and steel framing behind

Although modern EIFS has better weathertight performance, one must be mindful of concerns and limitations. Poorly executed details can lead to water intrusion and damage. Water-resistive barrier continuity, watertight flashings, and proper application to permit drainage are critical. Mechanically fastened EIFS can be prone to leakage around fasteners, particularly when fasteners miss studs leaving abandoned, open holes. EIFS is more susceptible to mechanical and impact damage than three-coat stucco or masonry veneer. Heavyweight reinforcing mesh can improve impact resistance, but EIFS may not be the best choice when mechanical damage or vandalism is possible.

Rigid insulation used with EIFS is combustible, so its components and assemblies (i.e., EIFS, water-resistive barrier, and wall structure supporting the EIFS) must pass product- and system-specific fire resistance tests and be installed in the manner they were tested. EIFS must also resist site-specific, code-required wind loads. Since wind resistance varies by system, the manufacturer can provide test results as needed to specify the system. 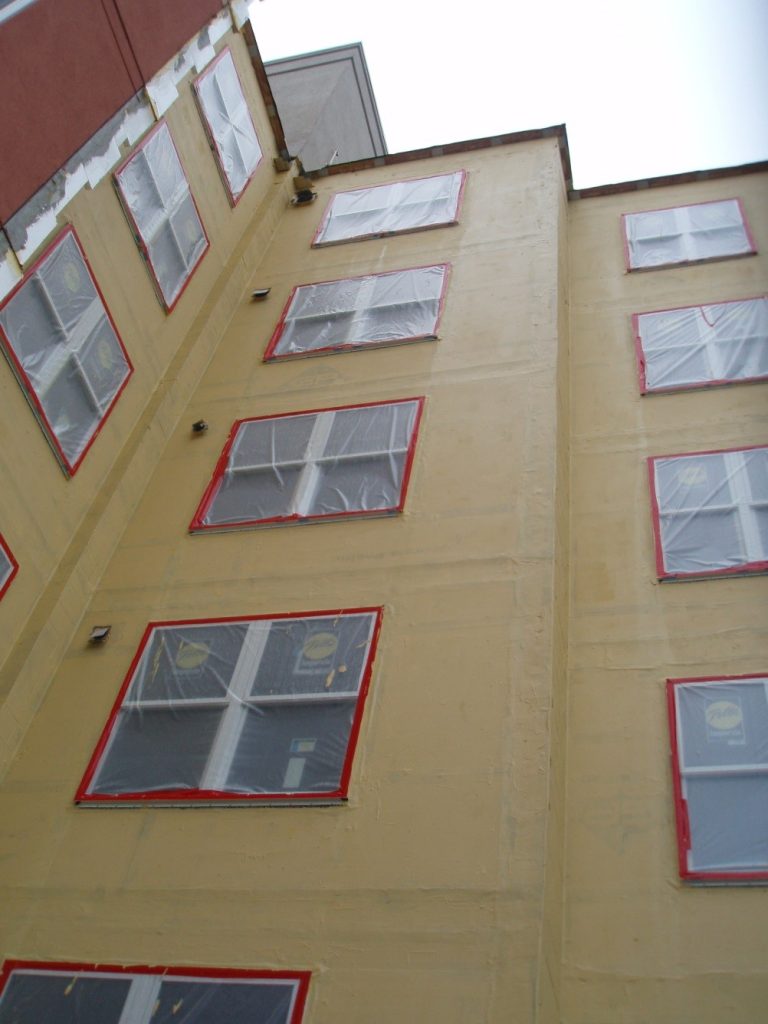 Construction of a drained EIFS system. The wall is covered with an air and water resistive barrier integrated with windows, making the wall weathertight prior to applying the EIFS.