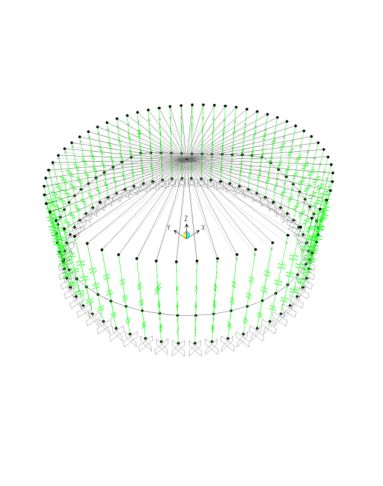 Seismic fragility evaluations of anchored flat-bottom storage tanks typically follow the approaches outlined in EPRI (1991) and EPRI (1994a), which are intended for tanks founded on rigid mat foundations. Direct application of these approaches is inappropriate for tanks anchored to ring foundations. Ring foundations are typically lightweight and can uplift at low seismic accelerations due to tank overturning, resulting in a significantly different behavior from tanks on mat foundations. This paper presents a case study of a metal flat-bottom storage tank anchored to a reinforced concrete ring foundation. A nonlinear static pushover analysis was performed as part of the tank seismic fragility evaluation to account for more realistic behavior. Several nonlinearities were captured in the analysis: foundation uplift, elongation of anchor bolts, mobilization of fluid hold-down forces with uplift of the tank base, and yielding of underlying soil under bearing at the toe of the foundation.

The analysis results showed that as the applied overturning moment increased, the forces in the anchor bolts increased until they quickly became large enough to uplift the foundation at the heel, without exceeding their yield strengths. Thereafter, as the foundation continued to uplift under increasingly applied overturning moment, the anchor bolt forces did not increase appreciably, and the tank-foundation system underwent rigid-body rocking. The pushover analysis was continued until the foundation uplifted sufficiently to fail essential piping attached to the tank. At this stage, the computed compression stresses in the tank shell near the toe, flexural and shear demands in the ring foundation, and soil bearing stresses at the foundation toe were much lower than their respective limit states. Consequently, the tank overturning capacity was limited by the foundation uplift failing piping attached to the tank.