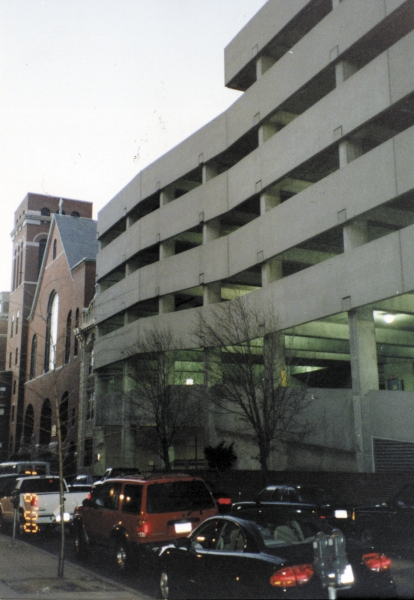 In the early 1920s, parking was becoming a significant problem in city centers. Automobile ownership had increased dramatically in the previous 10 years – from about 469,000 registered cars on the road in 1910 to about 9,241,000 in 1920. By 1923, “traffic congestion in some cities was already so bad there was talk of barring cars from downtown streets.– In older cities like Boston, MA, managing parking was increasingly challenging. When the Shoppers Garage on Boston’s Beach Street opened amid much fanfare in 1926, it helped alleviate a parking problem in the southern end of Boston’s congested commercial district. In a new concept for urban retailers, the garage was associated with Boston’s Jordan Marsh & Company. As the neighborhood around the garage declined and the garage changed ownership, the garage gradually became a victim of an aggressive environment and a series of inadequate repairs and improvements. By 2011, 85 years after its opening, the garage needed substantial rehabilitation to its interior structure and façades to continue to serve a Boston neighborhood undergoing a renaissance. This article traces the garage’s history and the project that restored it.