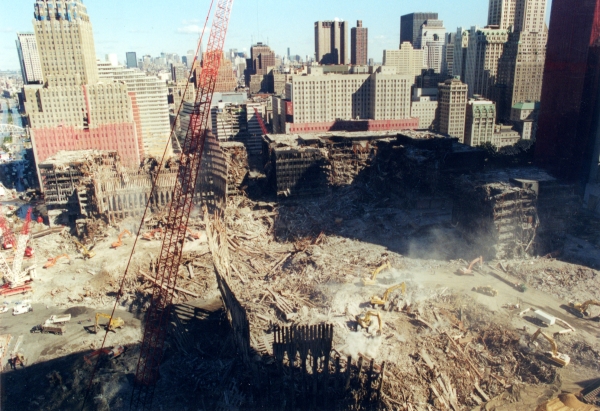 The National Institute of Standards and Technology (NIST) conducted an extensive investigation of the collapse of World Trade Center towers (WTC 1 and WTC 2) and the WTC 7 building. This paper describes the reconstruction of impact damage to each of the WTC buildings, as well as analytical studies related to the WTC building collapses. In addition, data and evidence that were collected, tests of the floor truss systems in the WTC towers that were conducted, the overall structural analysis approach, and the development of the collapse hypotheses are discussed to provide a basis for the impact analyses and the fire and structural response analyses in a companion paper. Three companion papers address the primary structural systems of the WTC towers and WTC 7, the effects of fire on the three buildings, and how these events contributed to building collapse. The papers provide an overview of the complex and extensive investigations undertaken by NIST at a level of detail that has scientific merit but presents key aspects from the voluminous official reports at a level suitable for the technical literature. The aircraft impact damage to structural members and their passive fire protection in WTC 1 and 2 were estimated through detailed aircraft impact simulations. The impact damage to WTC 7 was estimated from photographs after the collapse of WTC 1, where falling debris damaged the southwest corner of WTC 7. Based on the aircraft impact simulation, over half of the exterior columns on the north face of WTC 1 were severed and approximately 20% of the core columns were severed or heavily damaged. Spray-applied fire resistive material (SFRM) was dislodged by direct debris impact over five floors (Floors 94 to 98). WTC 2 structural damage was concentrated on the east side of the building. Over half of the exterior columns on the south face were severed and approximately 25% of the core columns were severed or heavily damaged. SFRM was dislodged by direct debris impact over six floors (Floors 78 to 83). WTC 7 was structurally damaged by debris from the collapse of WTC 1. Photographic evidence showed that seven exterior columns were severed near the southwest corner at the lower floors. Unlike the towers, the SFRM in WTC 7 likely remained intact except for local areas around the debris impact damage at the southwest corner. All three buildings were stable with the impact damage, but the WTC 2 building section above the aircraft impact damage leaned to the east and south.